We were a bit late planning our summer cruise this year. We had 'pencilled in' the dates earlier in the year but it was only at the end of the DCA Cobnor week, less than a week before the HSC cruise was due to start, that a few HSC members got together to make some plans. We decided to make a break from our traditions in that rather than starting our cruise from Paglesham, this year we would take boats by road trailer to Devon so that we could explore Plymouth sound and its tributary rivers. Three of the HSC sailing membership now live in Devon, so it was actually less of a journey for some of us than Paglesham would have been.

We gathered at John and Josephine's house then launched Gerald's Drascombe, Richard's Tideway dinghy and John and Josephine's home made dinghy at the Mountbatten slipway - see map above, it's toward the bottom right. This is a public slipway, originally built to launch seaplanes, so there is a good width of smooth concrete and there is also a public car park across the road. We are better provided with public boat launching facilities in the Plymouth area than in most other parts of the UK. Apart from Mountbatten, there are public slipways and a car park at Saltash and also a rather steep slipway without much car parking at Mayflower steps. The public slipway at Mountbatten is usable at most tide states, but the concrete does stop a bit short of the low water mark, that gave us an excuse to visit the cafe in the adjacent boat shed, once a hangar for the seaplanes, while we waited for the tide to come in a bit. Once afloat, we sailed to Millbrook creek where we camped overnight, walking along the coast path to the Edgecumbe Arms for the Sunday carvery.

The picture above shows Richard sailing his Tideway dinghy out from Mountbatten, passing the stone walls of the Citadel on the Plymouth waterfront. The lighthouse to the far left of the picture is a prominent landmark and tourist attraction on the famous Plymouth Hoe. This was originally the upper part of Smeaton's lighthouse on the Eddystone rock, some miles out to sea. When a new lighthouse was built on the rock in 1877, the upper part of the old lighthouse was dismantled and rebuilt on Plymouth Hoe, the lower part remaining on the rock. The picture below shows our three boats about to dry out for the night beneath a low earth cliff on the south side of the creek that leads up to Millbrook.

About to dry out in Millbrook Creek

On Monday we rowed in warm sunshine and little wind out of Millbrook Creek then through the narrows into Plymouth Sound and on to the twin villages of Kingsand and Cawsand. We beached our boats on Cawsand beach and mingled with other tourists in the picturesque village. Mark S was brave enough to take a swim and we also visited the village shop to get supplies for a proposed barbeque. Picture below shows how calm it was rowing through Plymouth sound on the way to Cawsand.

By mid afternoon there was enough breeze to sail again and we headed north from Plymouth Sound, up the reach of the Tamar known as the Hamoaze, passing the city of Plymouth and the extensive naval dockyard to our starboard. We then turned into the much quieter and more rural River Lynher. We stopped the night at a beautiful but remote spot, so no pub for supper, but we had our barbeque instead.

In the morning, Gerald and Mark rowed up river to take a look at St Germans quay and village, then we all headed back down the Lynher and under Saltash bridges to the public pontoon at Saltash where we met up with Mark T. who had come by car to join our party. Leaving Saltash the moment the flood started, we soon had a strong current sweeping us up the Tamar. It is a lovely river, winding through woods and small fields, although surprisingly this was one of the more industrial parts of the country back in the 18th and early 19th centuries. Industries included mining for minerals such as copper, lead and arsenic (the latter used for pest control on the cotton plantations), lime burning and ship and boat building. You can still find the remains of many limekilns and mines along the river valley. As we approached Calstock, Richard looked at his map and asked me if I knew whether or not the railway bridge would be high enough for us to get underneath. Having been that way a few times before, I was able to tell him that we should manage to squeeze under, and you see from the picture below that we were indeed able to squeeze under, it is actually about 110 feet from the water to the arch! Interestingly, up until 1934, there was a steam powered lift attached to the structure, this being used to transfer wagons between the railway and the quayside below. It looks like a stone viaduct, but it is actually concrete, but not reinforced concrete, it is made from large precast concrete blocks. The Devon based company that built it nearly went bust, they based their quote on other railway viaducts they had built in valleys with only small streams and they did not allow for the problems they encountered in sinking caisons to build the foundations for the piers standing in tidal water. 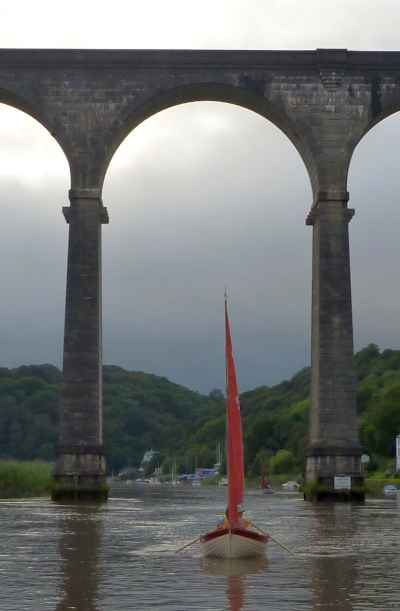 On Wednesday we took the ebb back down the Tamar, pausing for morning coffee at Cotehele quay, then on to Cargreen where we had made an arrangement with the Cargreen Yacht Club to camp at their premises.  At Cotehele Quay there is a small history exhibition and a dock where the restored Tamar sailing barge Shamrock is usually moored. This is part of a National Trust owned estate that includes gardens and the historic Cotehele house up the hillside above the river. However, on this occasion, with the tide ebbing and our boats about to ground on rather uneven ground alongside the quay, we had no time to explore much further than the nearby teashop.

Arriving at the Cargreen Yacht Club in early afternoon, we decided to go for a walk along what was shown on our maps as a footpath following the river south from Cargreen village. However, this footpath was either not as our maps, or we went very wrong somewhere, since we were soon lost in the fields and woods, eventually getting back onto a lane and returning to Cargreen. In Cargreen village we noticed an ex-telephone box now used as a kind of public library - nice idea. The Cargreen Yacht Club members made us most welcome and allowed us to use the full facilities of the club, we are most grateful and it is nice to be able to have a proper shower at some point during this kind of holiday.

The final day of our short cruise took us from Cargreen down to Saltash for lunch, then on to Edgecumbe Park for afternoon tea before returning across the top of Plymouth Sound to the Mountbatten slipway. To visit Edgecumbe Park, we anchored our boats on the beach at the Barn Pool, a small bay just to the south of the narrows where the Tamar enters Plymouth Sound. I was keen that we get through the narrows before stopping for tea since once the tide turned against us with only light winds it would be hard to get out of the Tamar into Plymouth sound, although having said that, Gerald did have an outboard motor on his Drascombe. In suitable weather the Barn Pool is a nice spot to go ashore and take a stroll in the extensive Edgecumbe Park, and to visit either the Edgecumbe Arms pub on the waterfront or the teashop in the orangery in the ornamental gardens.

The picture below shows us returning to Mountbatten at the end of the trip. The following day was spent at John and Josephine's house and on the nearby beach, since some of the party wished for a day of recuperation before starting long journeys back to the South East of the country.