Eight of us gathered at Geof’s in Berkamsted at 10 a.m. We set off under a cloudy sky, however there was none of the nasty wind chill that had prevailed immediately after Christmas, though the ground was still frozen in places. We walked south east along the Grand Union canal, then headed south across country towards Botley near Chesham. At 12.30 we arrived at a pub called the Hen and Chickens, which did not seem very busy. We soon found out that it was not serving food, though not until most of us had removed our boots! Luckily Geof knew of another pub about a mile away in Lye Green, so we headed there.

The Black Cat turned out to be a cosy pub recently taken over by a couple who were busy reviving its reputation. Though they were recovering from the previous night’s New Year party, the staff cheerfully dealt with our food and drink orders. After lunch we set off northward, en route passing Pathfinder ostrich farm, which is reputed to be one of the largest suppliers of ostrich meat in the UK. The fence had a warning that ostriches are curious wild animals, and should not be fed. They were certainly as curious as we were, gathering in a group to stare at us.

Josephine attempting to bond with some of the ostriches!

We reached the southern outskirts of Berkamsted as the light was fading, and the high street of the town looked cheerfully bright with its festive lights. As we neared the canal again, several of the party stopped to peer into the window of a ‘mobility’ shop; has it come to this? Back at Geof’s we were grateful for refreshing pots of tea, and the usual supply of mince pies. The unresolved question of the day: do ostriches sit down to go to sleep?

Most of our party settled into Swanage Youth Hostel on the Friday evening of the weekend, relaxing on easy chairs in the rather grand oak pannelled common room.

Cliffs near Worth Matravers

Saturday was a beautiful sunny day, a welcome change from the cold and snow that had covered much of the country only a few days before. We set off westwards from Swanage, walking along the cliff tops high above a sparkling blue sea. The sea cliffs in this area have been used for quarrying stone and in places they are riddled with man made caves and tunnels. We reached the little cove shown above, then we turned inland to find the country pub at the village of Worth Matravers. We were not the only ones out rambling this fine day, the pub was packed and the que to the pub bar extended out of the front door. Eventually we got some pasties for lunch and joined the crowd of people eating and drinking in the front garden of the pub.

After lunch we walked to Corfe villiage which is dominated by the imposing ruins of Corfe castle standing high on the castle mound, as you can see in my photo above. There is a restored steam railway that runs the few miles from Norden to Swanage, stopping at Corfe. We checked the timetables and worked out that there was just time for a cream tea at one of the several teashops near the castle before catching the last steam train of the day back to Swanage. Doesn't the picture above look like it could be model railway built by the more painstaking model railway enthusiasts?  Our train back to Swanage was pulled along by a large steam locomotive with lots of wheels, not dissimilar to those that I used to be taken on for special treat days out to London in the 50's and early 60's. I should not go further into technical details, not wishing to give the impression that I could be a bit of train nerd.

We started our Sunday ramble by heading down to the waterfront to watch one of the regular lifeboat training exercises, photo shows the lifeboat going into the sea, a very calm sea on this occasion. The keel of the lifeboat runs over a series of wheels built into the slipway, and the lifeboat has small bilge keels which keep it upright as it speeds down the slipway. Some of the lifeboat crew showed us round the lifeboat house with its immaculately maintained equipment. We then turned eastwards along the coast path climbing up from Swanage onto Ballard Down from which we had a view over Poole harbour and to the Needles on the Isle of Wight, some fifteen miles to the East. We then walked downhill to the spectacular Old Harry Rocks, photo below, then on to Studland for lunch, returning to Swanage by an inland route. Our final meal was cream tea - this time on the platform by the cafe at the restored Swanage station.

Richard, having carefully arranged for a fine day, lead five members over Box Hill from Mickleham to Betchworth for a pub lunch. This was an interesting walk for industrial archaeology. First we saw Reigate Heath windmill (from three kilometers away). We then walked round the top of and descended into Betchworth quarry where there remains a fine tower, adjunct of an aerial ropeway. A diversion through the village of Buckland took us by another windmill. This was an estate saw mill and workshop with wind driven lathe and saw bench. Part of the Buckland Court Estate, she was built circa 1870 by W. Cooper of Henfield and has recently been restored. See this link for more information.

After lunch in Betchworth, we followed the Greensand Way to Brockham and then via a carriage drive across Betchworth Park to the foot of Box Hill. A stiff climb brought us to the National Trust tea shop just before they closed. On the descent of Box Hill to the car park we came upon Broadwood Tower. A folly or perhaps viewing tower partly ruined and blocked up. About 20 feet high by 10 feet diameter with a view to the west built for Broadwood the piano manufacturer. Thanks to Richard this was a good walk of about 10 miles and 300 meters of climb in good weather. 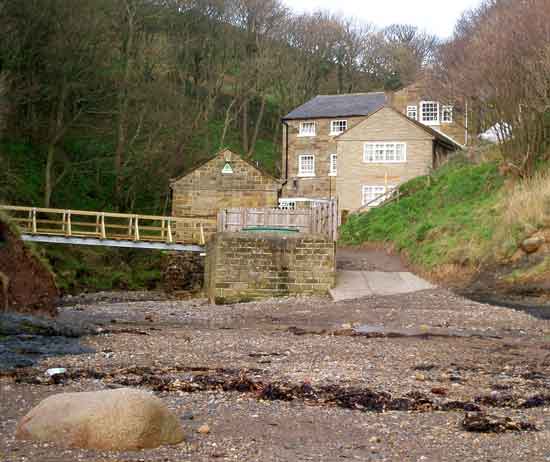 Boggle Hole YHA - view looking up from the beach

I think we made a good choice of hostel this year. The hostel is tucked away in Mill Beck, a little valley on the coast about five miles south of Whitby. The building is an old water mill, though little signs of the working parts of the mill remain. The Cleveland Way coast path passes a few yards from the front of the hostel. It was nice to be in this secluded spot, and to wake to the sound of birdsong, and the waves on the beach. (The meals served in the hostel were also excellent - Ed.) 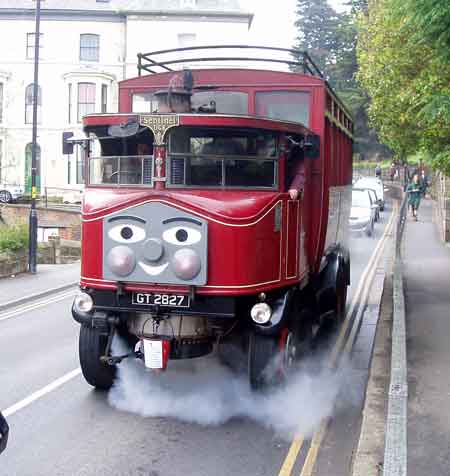 Steam Bus at Whitby - Is it an original Sentinal steam lorry with bus body added later on? - ignore the face on the front!

On Saturday morning seven of us set off to walk to Whitby, taking an inland route through mostly pleasant gentle countryside. The sky was cloudy, and there was a fine patchy drizzle most of the day, but not enough to worry us. Nearing Whitby we found the track of a former railway, now a Sustrans trail, that took us by Larpool Viaduct Bridge over the River Esk, and into the centre of Whitby town. On the way into town, we overtook a steam powered omnibus: true, it was held up in the heavy holiday traffic. We paused for lunch at a fish restaurant before crossing the swing bridge near the harbour and climbing steep steps up to the ruins of Whitby Abbey. There is a splendid view over the harbour from here. Following the Cleveland Way coast path, we left the town and caravan sites behind. The path here is mostly at the top of high cliffs, overlooking a calm, grey sea. The air was patrolled by gulls, fulmars, and a noisy colony of kittiwakes. By the time we reached Robin Hood’s Bay it was 6pm, and we were too late for our hoped-for tea shop stop. We reached the hostel at 6.30, after covering more than 16 miles! 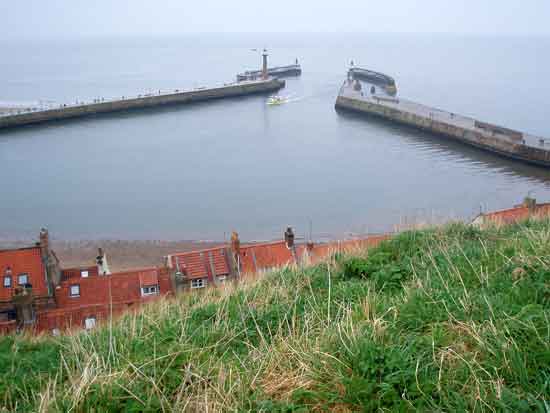 Looking down on the harbour entrance from near the Abbey

For Sunday we decided that a less strenuous day’s walk was in order and headed south towards Stoupe Brow, then via Thorney Brow and a pleasant little wooded vale called Harry’s Folly. We then ascended to the main road, where we hoped for an early lunch at the Flask Inn. We then headed east via Cook House to Stony Marl Moor. It was easy to find our direction across the moor as the path headed exactly towards a radio mast near Ravenscar. The afternoon had warmed up, and near the site of the former town station we found a busy tea shop for some refreshment. Afterwards a stop at the visitor centre revealed the history of this failed Edwardian resort – “the town that never was” - and the nearby Alum Works. From 1640 to 1862 Ravenscar had an industry of world class importance. A chemical called Alum was produced from the local shale. Alum was used to cure leather and fix dyes in cloth as well as for medicinal uses. This chemical was of huge economic importance and the Peak Alum Works even attracted raids by foreign pirates and was guarded by cannon set into the cliff top. The extraction process to produce alum was peculiar, involving burning the rock for months over huge bonfires then pouring human urine over the heaps of rock. Ravenscar has always had a sparse population and so the urine had to be collected from cities all over England and imported by the boatload. It is said that the first public toilet in the world was built in Hull to provide solvent for the Alum Trade. MORE INFORMATION HERE  From Ravenscar we continued on the Cleveland way back to Bggle Hole. This time we were back at the hostel in good time for a bit of relaxation before we enjoyed another excellent three course evening meal. On Monday morning we headed home in probably the best weather of the weekend.