A new year's day walk in the Chiltern Hills is becoming one of our traditions. The area offers ramblers so many footpaths that we don't often seem to be repeating our routes. This year we did an anti-clockwise circuit from Berkhamstead, through the Ashridge estate to the Bridgewater Arms at Little Gaddesdon for lunch, then back through Ashridge woods to Geoff's house for tea and mince pies.

The Ashridge Estate is now National Trust Property and Geoff has been a voluteer on their working parties, he took us to see some repaired brick work on a little ornamental bridge that he had been involved with - see below:

Ornamental Bridge on the Ashridge Estate

From what Geoff told us, this bridge doesn't really serve much useful purpose, The Earls Brownlow, who took over the estate from the Bridgewater Dukes and Earls, probably had it built to keep local people employed during the great depression in the 1930s. 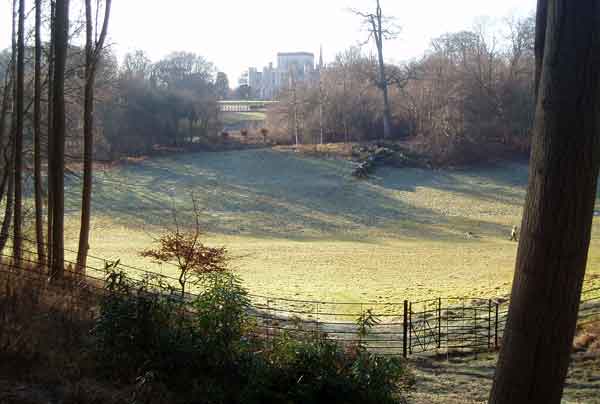 Below is the view looking in the opposite direction from the last photo, the house accross the open land is Ashridge House, completed in 1813 for the 7th Earl of Bridgewater. The house is now a business school, a usual modern usage for stately homes in the London area.

Leaving Little Gaddesdon, we passed this unusual house, presumably part of the grand estate. We walked through extensive woodland on the way back to Berkhamstead, look at this huge tree!

Geoff - Thank you for the tea and mince pies - always very welcome when you get back from a winter walk at dusk with the frost coming on!

Walk from Petersfield to Liss - 30 January

Four of us met at Waterloo station to catch the 0930 train to Petersfield: Geof, Esin, Richard, and Frank who led the walk. From the town, we found the footpath that follows the Hangers Way long distance footpath northwards as far as Alton. 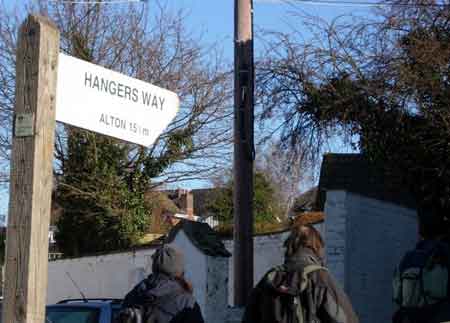 We were to follow the LDP for five or six miles before turning eastwards and south towards Liss. The term “hanger” is a local expression for the steep wooded hills typical of this part of Hampshire, and has nothing to do with hanging, as we assured Esin.

The steepest assent we made was up Shoulder of Mutton Hill, photo below, where there is a memorial to the poet Edward Thomas who died in 1917 at the Battle of Arras. Probably his best known poem is ‘Adlestrop’, which immortalised a brief moment at the station of that name in Gloucestershire. SEE HERE 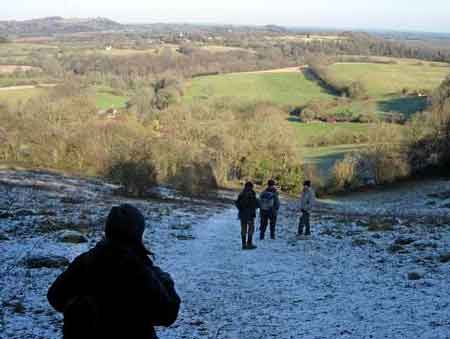 Recovering our breath, we rested on a bench nearby, enjoying the fine view and the pleasant sunshine. Cresting the ridge, as we began a descent towards Hawkley village, we saw Len who had walked up to meet us.

Reaching the village green, we admired the helm roof of the parish church and made our way to the Hawkley Inn, where Frank had reserved a table for lunch.

After lunch, Len accompanied us across some muddy fields before bidding us farewell, and the four continued our walk towards Liss, where we planned to rejoin the train service back to London.

We were lucky to have a fine sunny day, though it remained cold, with some ice and snow in areas not reached by the sun. Well planned Frank! 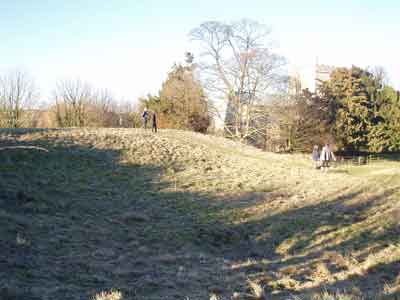 Some of us stayed at Mark T.s house over the weekend, viewing the dinghy exhibition at Alexandra Palace on the Saturday (and spending lots of money on new drysuits), then doing a ramble in the Hertfordshire country side on the Sunday.  We started the ramble from a small car park on the Icknield way path (a Roman Road) and just south of the appropriately named 'Tingley Wood'. It's pleasant undulating country in these parts, probably about the extremity of the north eastern end of the Chiltern hills. We started with a loop round to the south, through the hamlet of Little Offley, recrossing the Icknield Way to reach Hexton for morning coffee in the village pub. We then pressed on to the village of Pirton for lunch and then took a look at the Pirton motte and bailey, the site of which lies on the Icknield Way. Today, this motte and bailey is a flat topped circular mound surrounded by a ditch and an earth bank encircling the nearby churchyard. The artists impressions on the poster display sugested that it would have originally been quite impressive with wooden stockades on the mound and the earth bank.  Returned from Pirton to our cars, then back to Mark T.s place for refreshments. Thanks Mark for a well organised day out, and for the tea and cakes!.

We gathered at Totland Bay YHA on Good Friday afternoon and evening, most of us having used the Lymington to Yarmouth ferry to reach this fair isle. No-one asked for our passports as we came off the ferry, but the Isle of Wight does perhaps give a bit of the feel of traveling abroad for a holiday - or is that silly?  We settled into the hostel then went for a nice meal in the pub about half a mile towards Freshwater.

Saturday was looking to be a bit of a grey day, so we left the obviously spectacular walk around the Needles headland for Sunday when the forecast was promising a bit of sunshine. Our first stop on Saturday morning was Freshwater bay. We dodged the surf on the windswept shingle beach then as the rain came we took 'elevenses' from the coffee machine at the lifeboat house, not an RNLI lifeboat but an independent one. The rain stopped and started for the rest of the day, with occasional patches of weak sun at times.

From Freshwater we climbed onto the chalky ridge that forms a spine across the island from the Needles in the west to Culver down near Bembridge in the east. We took lunch at Hulverstone PH then dropped down to the coast and returned to Freshwater along the cliff path. The cliffs are soft reddish earthy material at Compton Bay, turning to tougher and more vertical chalk as you get towards Freshwater. We saw evidence of recent landslides along the softer part of the cliffs, and in one place a section of a tarmacked carpark had fallen halfway down the cliff. We watched a group of surfers on the beach below, it looks so cold and miserable on a grey day, but I guess modern wetsuits are what makes this sport as popular as it is. We took afternoon tea at Freshwater then back to the Hostel for evening meal at the same pub we visited the previous evening.   HSC rambles are becoming more of a mobile feed than ever, the last few rambles I have been on we have managed to fit in a morning coffee as well as a pub meal and afternoon teashop visit plus an evening pub meal - well its nice to break up a long walk, I am not complaining. 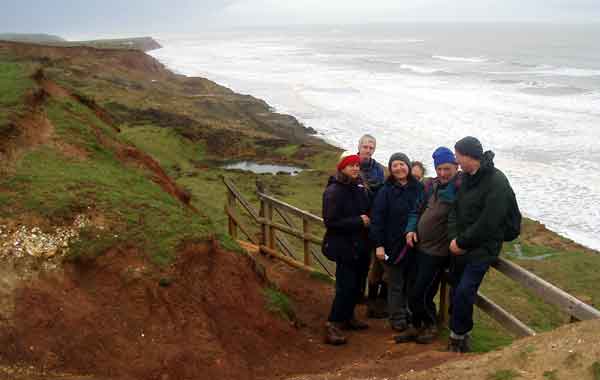 Green painted eggs at breakfast reminded us that this was Easter Sunday, a nice tradition. The weather had improved a lot as we set off from the hostel back up onto the chalk ridge I mentioned above, but this time heading west towards the Needles where the chalk ridge has eroded into the sea at the western extrmity of the island. We paused for the group photo (below) at the Tennyson monument. 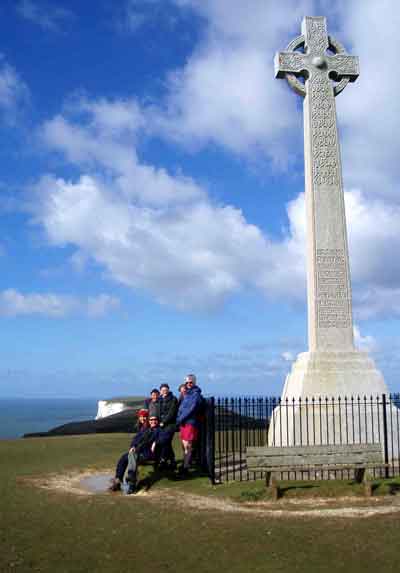 Tenison monumentnument, looking west towards the pointy end of the island

Reaching the end of the island, we stopped to look at the NEEDLES BATTERY . These defensive gun positions were first built in the 1860s as a defence against the French, even though the French were not really trying to attack the UK by that time. The site was used as an observation post and gun position during the world wars then from 1956 to 1971 it became a test site for development of military rocket engines. This was the cold war era and the site offered security, being boarded by the sea and sheer cliff faces.  Rockets were built and the rocket motors were test fired but the actual launches were from Woomera in Australia. One of the five Black Arrow rockets built here was the one and only British built rocket to ever launch a British built satelite into space, so far anyway. The site is now owned by the National Trust and they have a little exhibition that includes bits of quaint looking 1960s style electronic hardware.

We returned from the Needles passing Alum Bay, which is a very popular and crowded tourist place with lots of gift shops and cafes, so not the kind of place where we would choose to linger. Walking on over Headon Warren we looked down from this high ground and saw a 27 foot sailing yacht sink in front of our eyes, not something you notice happen every day. 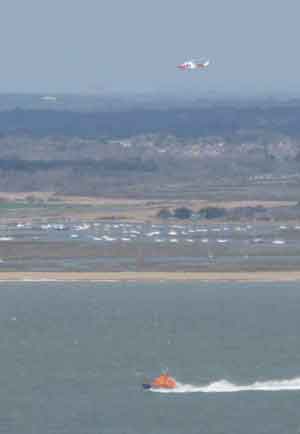 Crew being winched into helicopter as top of yacht mast - circled - disappears from view (photo by Mark T.)

This yacht had somehow managed to run aground on what looked to be about the roughest patch of white water along the edge of the Shingles bank. A passing RIB was first on the scene and picked up two people from the water. A rescue helicopter and the Yarmouth lifeboat arrived within a few minutes. The two remaining yacht crew were winched up into the helicopter and the other two were transfered from the RIB to the lifeboat. By then the yacht hull had sunk, leaving just the mast above water, the sails still set. Within a few more minutes the flood tide had carried the wreck into deeper water and the mast then also disappeared from sight. I later heard that no one was hurt but and the yacht was eventually salvaged by divers using airbags, but it was much damaged, with a large hole bashed in the side, which is hardly surprising.

We took lunch at a waterside cafe at Totland Bay, then, since it was a bit early to return directly to the hostel, we continued our walk along the coast path to a point near Fort Victoria, the fort opposite Hurst Castle on the mainland side of Hurst narrows. We then returned via an inland route, passing Golden Hill Fort, another defense built against the French in the 1860s, but now being converted into luxury flats. From there we followed tortuous footpaths round small fields, woods and round the backs of houses to get back to the hostel with minimal use of actual roads, always a challenge for our route finders. That evening we dined in a waterside restaurant quite near the hostel at Totland bay, looking out over a now calm Solent as darkness fell and the various bouys and lighthouses started to blink across the water.

On Easter Monday we took a bus from Totland to Yarmouth, then went our various ways home.